Gold will rocket to $3,000 next year – at least that’s what Saxo Bank says. Does this prediction make any sense though?

According to the publication, next year, the markets will finally discover “that inflation is set to remain ablaze for the foreseeable future”. In the spring, China will fully pivot away from its zero-Covid policy, unleashing demand and a new surge in commodity prices. Inflation will soar again, but this time it will coincide with the Fed’s easy monetary policy amid elevated market volatility and a recession. It will then become clear that the US central bank will fail on its 2% inflation mandate, sending gold prices much higher. The yellow metal is said to be additionally supported by the rising global liquidity and “geopolitical backdrop of an increasing war economy mentality”.


Is this prediction likely?

No, of course it’s not. After all, it’s an outrageous forecast. The second wave of inflation is possible, and it can be more persistent than some optimists assume, but I don’t believe that it will get out of control. Stagflation could complicate curbing inflation to the target, as the Fed could be forced to stimulate the economy at still relatively high inflation. However, the Fed’s quantitative easing and cuts in the interest rates shouldn’t prompt commercial banks to expand credit significantly during the recession, which means that the broad money supply won’t accelerate again (which would translate into a new burst of inflation).

And, of course, gold soaring to $3,000 is highly unlikely, even with inflation ultimately beating central banks. Given the current level of about $1,800, it would be a 66% surge. The last time gold achieved such an annual rate of returns was in the 1970s. Since then, the highest annual rate of return was 32% in 2007, only after the Great Recession started. In the pandemic year of 2020, gold soared about 25%.

What does it all imply for the gold (and silver) market in 2023? Well, as the chart below shows, the price of gold whipsawed in 2022 around $1,800 because of the Fed’s tightening cycle. As the U.S. central bank is going to adopt a more dovish stance in face of the upcoming recession in 2023, gold should rally. 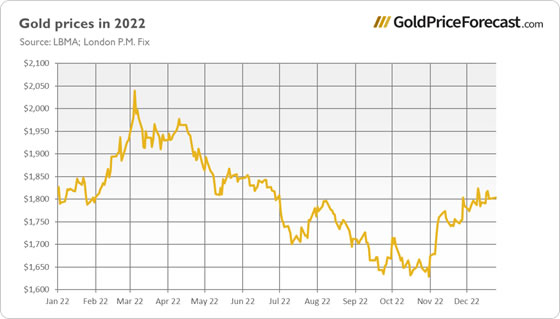 Now, the trillion-dollar question is: how much. Assuming a 25-32% surge, as in the last three recessions, the price of gold could skyrocket to $2,200-$2,400. It seems to be a more reasonable prediction, but even this forecast could be too outrageous. If the recession arrives in the second half of 2023 rather than in the first six months, the upside potential of gold will be more limited, especially if we see a rush towards cash and a selloff in the gold market in the first phase of the economic crisis. In such a scenario, it would be gold’s great achievement to surpass its previous all-time peak of $2,075.

Will that happen? I have no idea, I’m an economist, not a fairy. But I wish all you – both bulls and bears – a fulfillment of your dreams, successful transactions, and financial abundance in the new year of 2023!

If you enjoyed the above analysis and would you like to knowmore about the gold ETFs and their impact on gold price, we invite you to readthe April MarketOverview report. If you're interested in the detailed price analysis andprice projections with targets, we invite you to sign up for our Gold & SilverTrading Alerts . If you're not ready to subscribe at this time, we inviteyou to sign up for our goldnewsletter and stay up-to-date with our latest free articles. It's freeand you can unsubscribe anytime.

We're Entering a Major Crisis; CBDCs Coming in 2023, Serfdom is Upon Us Warns Doug Casey